“From its inception the Society has made an effort to attract members of the highest type so that the membership will always be a body of mature men and women of high character, all interested in actively promoting the interests and welfare of Philately.” The above two paragraphs quoted from a 1942 Membership Prospectus is one of the few remaining historical documents of the early years of the Society. Fortunately the Society has endured better than its archive. Stamp collecting in Lancaster County was an active hobby in 1942 as is it today.

What follows is a sampling of items from our archive. Check back often. If you have an item(s) to contribute, we would like to hear from you. Contact Dr. Charles J. DiComo. Click to enlarge for a closer inspection.

The Society is grateful to Bob Kotanchik, Karl Kotanchik, and Jen (Kotanchik) Perot for their generous donations to the PSLC archives of the first mailer’s postmark that was approved for use in Lancaster, along with a postcard using the handstamp mailed to Jen while she was living in England. This permit and mailers postmark (#1) was originally issued to Karl in 1980, with its first day of use 4 JAN 1980. An amazing piece of Lancaster County postal history and we thank them all for preserving and allowing us to showcase. 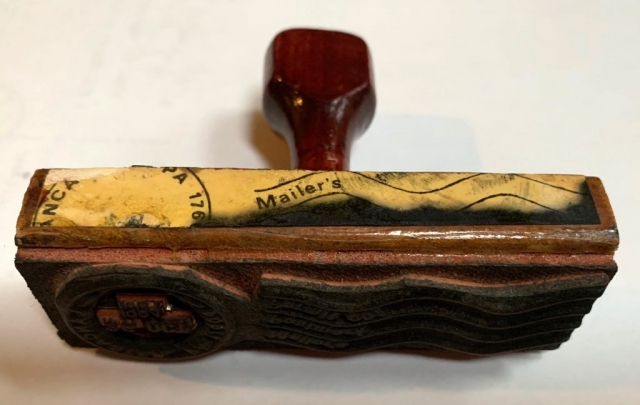 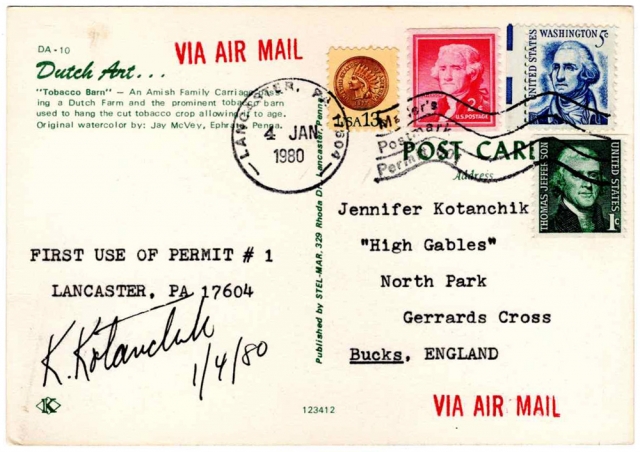 Shown is an original Lancaster Stamp Club Third Annual Banquet brochure donated to the archive by James H. Ziogas. It was held at the Malta Temple on East King Street in Lancaster on January 8th, 1934. The program consisted of a toast by Rev. H.G. Hartman, an invocation by Rev. Charles Berghaus, a welcome by President Edgar Worrest, and an address by Robert H. Davis of the Lansdowne Stamp Club on “Plating Norway No. 4”. Take a look at the dinner menu, with philatelic choices… A great piece of Society history.

This newspaper clipping and envelope/enclosure was donated by member Ron Tweed PSLC#457. His father was a Lancaster Stamp Club (LSC) founding member.