This page recognizes our Members and friends who have over the years received Awards and/or Honors for their dedication, commitment, authorship and leadership to the mission of the Philatelic Society of Lancaster County and philately in general.

And the Awards Are In!

2022-11-11… Our own PSLC Newsletter, edited by Paul Petersen, and Society Website (lcps-stamps.org), developed, designed and managed by President Charles J. DiComo, PhD, have won a Gold and a Large Vermeil, respectively, in the APS Star Route competition. Recently relaunched, this competition judges the various newsletters and websites of American Philatelic Society Chapters.

Since the mid-1800s, the Star Routes were the most challenging routes in the country to deliver U.S. mail. Congress called for contractors to deliver the mail with “celerity, certainty, and security,” soon replaced with three stars. Our chapters serve and grow the hobby in those same tough terrains with that same mission.

The Society website (lcps-stamps.org) is our virtual presence; where all can access current and past issues of our award-winning PSLC Newsletter; in addition to useful philatelic links, exhibits, presentations, useful resources, affiliates, member spotlight, regional stamp shows, history and awards, etc.

The full results can be seen at:
https://stamps.org/community/star-route 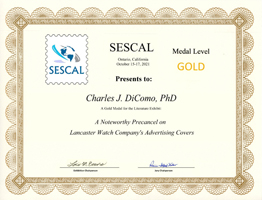 2021-02-01… It is with great pleasure that we announce PSLC President Dr. Charles J. DiComo was the recipient of the three awards for his article appearing in the February 2021 American Philatelist research issue entitled A Noteworthy Precancel on Lancaster Watch Company’s Advertising Covers. These include a Gold Medal at the SESCAL 2nd Annual Literature Exhibition, a Gold Medal at CHICAGOPEX 55th Annual Literature Exhibition and a Large Vermeil at the American Philatelic Society Great American Stamp Show’s 53rd Annual National Literature Exhibition. Congratulations to all those that submitted their articles; there was keen competition this year.

APS Writers Unit 30 Literature Award
2020-02-10… It is with great pleasure that we announce PSLC President Dr. Charles J. DiComo was the recipient of the Grand Award and Large Gold Award in Literature at the 66th Sarasota National Stamp Expo and Writers Unit #30, which took place February 7-9, 2020. This marked the Second Exhibition of Philatelic and Postal History articles, with a jury that examined and critiqued over 40 articles, headed by Alan Warren, with fellow jurors Nancy Clark and Hal Vogel.

This recognition was for his article entitled New Plate Flaw Discovery: “Dash and Ink Trail” on 3¢ 1851 Stamp. This original research appeared in

The Chronicle of U.S. Postal Issues 259, August 2018 published by the U.S. Philatelic Classics Society. It is rewarding to see that the literature judges at Sarasota recognized that new discoveries involving our stamps (as opposed to our postal history) are nowadays very scarce and thus worth rewarding.

In addition, Charles also received a Large Vermeil for An 1845 “Ship Letter” from Port-au-Prince, Hispaniola to New York City on the Brig Hayti, which was published in the

Congratulations to all those that submitted their original research to the APS Writers Unit 30; there was keen competition this year. The Sarasota 2020 Literature Palmares recipients can be viewed The Society has been awarded a Gold Medal in the 2018 American Philatelic Society (APS) Website Award Competition. This award recognizes website excellence. Four experienced judges from across the country following a rigorous vetting process made the determination, along with suggestions for continually improving our web presence. We are grateful and honored and have proudly posted the Gold Award badge on our home page. A certificate signed by the President and Secretary of the American Philatelic Society recognizing this great work by Dr. Charles J. DiComo was mailed to the APS representative of our Society. This award exemplifies the very best that is happening out in the local stamp and postal history communities. For more information, visit the APS. The January 7, 2019 Issue of Linn’s Stamp News contained an article by William F. Sharpe in the Computers and Stamps section announcing the winners of APS philatelic website competition. The PSLC was prominently featured; thanks Bill.

APS Articles of Distinction Award
The American Philatelic Society has established the Articles of Distinction for our Chapters and Affiliates to honor their authors by hosting an annual “best article” competition and submitting the winning article for all to enjoy. In addition to awarding authors, this allows the APS to provide exposure to groups, encourage philatelic writing, and sharing these wonderful articles with the membership. For more info, visit the American Philatelic Society 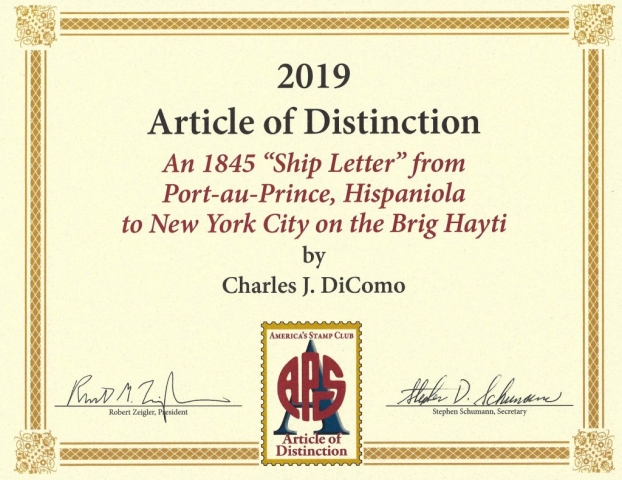 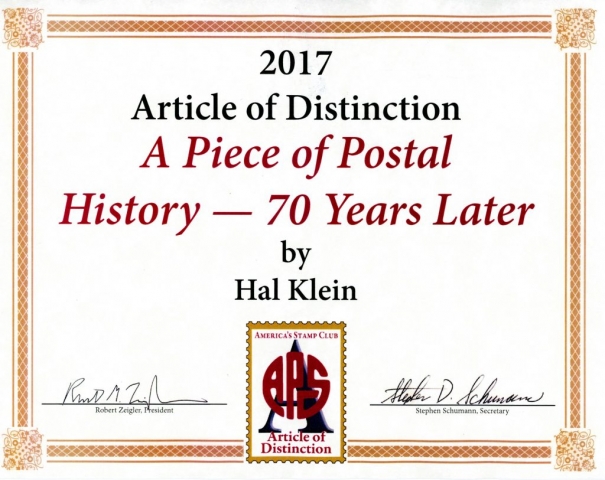 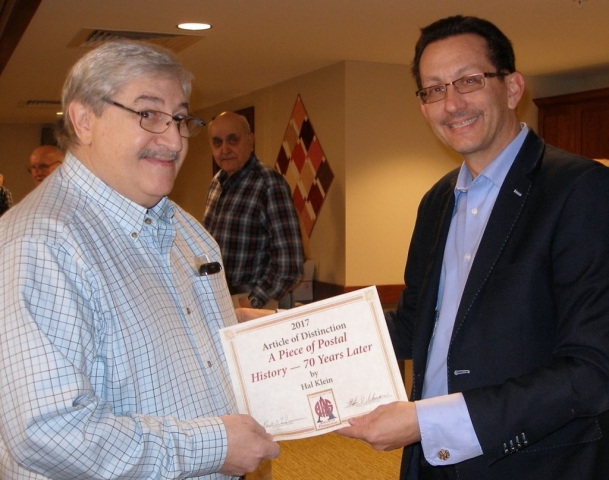 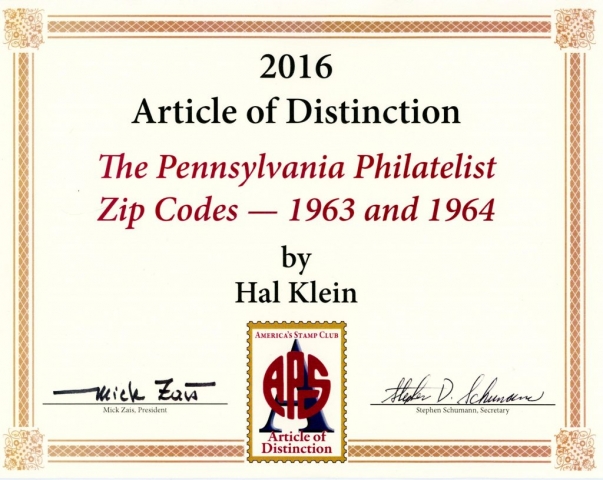 Nicholas G. Carter APS Volunteer Recognition Award
This Award is given to recognize the outstanding efforts of the APS volunteers at national and local levels; and to recognize our younger members whose outstanding leadership is crucial to our future. The awards have been named in memory of Nick Carter who helped to establish them. Nick felt it was important to recognize those unsung heroes who contribute their talents, time and energies to benefit stamp collecting and the Society. For more info, visit the American Philatelic Society

APS Spark Plug Award
This Award is given to recognize positive achievement of benefit to the presenting APS Chapter. Every club must have at least one member who does for the club what spark-plugs do to engines. The certificate may be presented to an individual or an organization. For more info, visit the American Philatelic Society

APS Newsletter Recognition Award
It should be noted that the APS Chapter Newsletter Competition Awards were discontinued in 2017. The Society is very grateful to Paul Petersen for his Editorship and ensuring we publish a first rate Society newsletter.